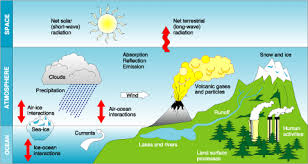 Human greed and unabashed materialism have begotten a monster which is ready to devour us. Excessive pollution from consuming fossil fuels is disturbing the balance of our ecosystem and threatening a destroy life on the planer.

The Specter of climate change looms large but nobody seems to notice it. Turn on prime time TV in Pakistan and there is hardly a mention of it. Those on the pulpit debate vociferously about trivial matters but this fire which is ranging to engulf saints and sinners alike is hardly a cause of concern for them. Rulers plan economic growth but do not say what use it will be when the planet is no more. Businessmen ignore the environment, seeking interim profit failing to realism that our actions are like a boomerang. They eventually come back to haunt us one day.

Global warming should be taken very seriously. It is a very danger that threatens our existence. For the sorry state of the planet, we have no one but ourselves to blame. Each one of us individually is responsible for if we do not fall in the category of mass producers responsible for carbon emissions that harm the earth’s atmosphere, we definitely are among the mass consumers who drive such mindless economics.

Many of us also fails to realize that looking after the environment is equally the remit of those who believe in God. Polluting the air, poisoning the rivers, cutting trees, destroying flora and fauna will not only have repercussions in this world but also have an impact on the afterlife of the perpetrators. This Quranic description, ” When he turns his back, his aim everywhere is to spread mischief (yufsida) through the earth and destroy crops and cattle. But Allah loveth not mischief z9fasaad)” warns that destroying the environment is an act of fasaad( disorder, mischief ) and is disapproved by God.

In contrast to the injunction “Allah loves those who keep themselves pure and clean”, our towns have a reputation for garbage-littered streets and overflowing sewage. Not to mention the havoc created during Eid ul Azha, when the gory mess left ob the streets is actually a blatant affront to Quranic injunctions emphasizing cleanliness.